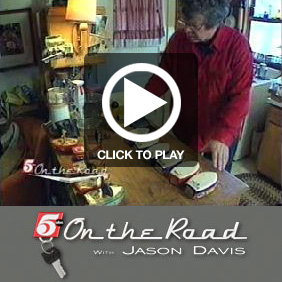 The St. Paul Pioneer Press calls them "The Gift of Minnesota."

Mpls – St. Paul Magazine writes, "Dana McDill, a seventeen-year Uptown [Art Fair] veteran from Princeton, Minnesota, echoes Ross's feelings about the local event. Creator of the World's Greatest Bath Boats, a handsome fleet of hand-carved wooden toys for the tub, McDill admires the yearly innovation of the show. 'There's always something new here,' he says, 'whether it be the entertainment or the giant sculpture over the intersection.' Though his two sons have grown too big for him to sling on his hip during the sale, the family still gathers every August to help out at the Bath Boats booth. McDill will make a beeline for his usual location at the top of the Uptown Mall for this year's fair… He promises some spectacular additions to his toy-boat collection, but is tightlipped about specifics. 'People will just have to come see for themselves'."

Minnesota Monthly magazine said, "Handmade with Minnesota-grown wood and hand-painted by Dana and his wife Mary, these chubby skiffs have been a hit at art fairs and a favorite baby shower gift for two generations. Dana even custom-paints boats for special little sailors." 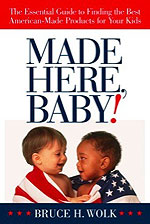 "Made Here, Baby! The Essential Guide to Finding the Best and Safest American-Made Products for Your Kids" Published May 2009 and available from your local bookstore (ideally) or from Amazon.com.

Here's some history of World's Greatest Bath Boats, from an article in the St. Louis Post-Dispatch:

Dana McDill made his first boat for his small son. His wife made a sail from interesting colorful fabric. A few weeks later, he took a few boats to the streets of San Francisco and they sold, fast. Within a year he had quit his job as a letter carrier and eventually moved back to his native Minnesota. The boats have supported the family ever since. Now when their son is home from college, he helps paint the boats. McDill said he relished talking to people who come to art fairs. "Talking to people is the fun of it. We make boats all winter and go to shows all summer and show them." "They are made to sail, but a lot of people collect them," he said. He enjoys hearing about the boats' adventures. People tell him they display them in cases in their homes and offices, but others sail them. A Minnesota couple found one of his boats washed up on an isolated shore of a lake. They saw no one around to claim it so excitedly added the "shipwrecked" find to their collection of three McDill boats – and bought another as they told him the story."

The success of bathboats.com shows that you don't have to make a million dollars to positively change your life. Thanks to help from the internet, Dana and Mary McDill live on their own terms, fill orders from their home studio at their own speed, and enjoy the flexibility of an e-business enabled lifestyle that was unknown a few years ago.